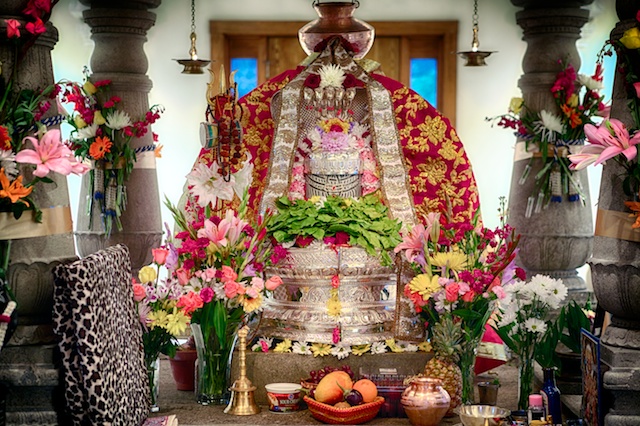 The father of Karthikeya and Ganesh, and the husband of Parvathi, Lord Shiva contains all the principles of the elements. According to Mundaka Upanishad, “Fire is his forehead, the sun and moon are his eyes, the directions of space are his ears, the Veda is his voice, the wind that pervades the world is the breath which raises his chest, his feet are the earth. He is the inner Self of all living beings.”

The universal power of destruction in which all existence ends and from which it rises again is known as Shiva. Shiva is the embodiment of the centrifugal force – the tendency for dispersion, disintegration, and annihilation. Therefore, Shiva is known as the destroyer. He is the death of death, in other words, he brings eternal life. As this fountain of life, Shiva is the origin of all creation. It is from destruction that life arises.

You could say that the Supreme power is divided into three parts: the creator, Brahma; the sustainer, Vishnu; and the destroyer, Shiva. You could also describe these parts as: 1) Brahma, the state of awareness, the revolving tendency, ritual as the way of realization; 2) Vishnu, the vision of dream, the centripetal tendency, self-realization through thought or knowledge; and 3) Shiva, the emptiness of dreamless sleep, the disintegrating tendency, silence of mind and the dissolution of individuality as the way of realization.

Shiva is beyond the three gunas: sattwa, rajas, tamas, and therefore they are in his control. On the path to knowledge, tamas is the greatest barrier. Shiva can destroy tamas and open the gates of wisdom.

The name “Shiva” is sometimes given to the peaceful Transcendental aspect of the disintegrating tendency. Shiva’s other name is Rudra. “Rudra” is the ferocious, relentless, personification of destruction, the embodiment of the tendency for dispersion and disintegration. In Yajur Veda, there is a hymn to Rudra, Shri Rudram, that is chanted by pandits while performing Rudrabhishekam (holy bath), a powerful ceremony that washes away one’s karma.

Shiva is sometimes called Hara. Hara is taken to mean the giver of wonders.

Shiva as Maheshwara, the Lord of Knowledge, represents the state where all differentiation ceases to exist, where our individuality merges into the greater Being within us, the true Self, unqualified Transcendental Divinity that is more vast than the universe. The God who is above all the gods, the indivisible whole, is the Great God, Maheshwara.

Shiva can unite only with himself. The spark of creation appears when Shiva, the Absolute, and his power, Shakthi, merge. From that springs forth the universe. Sometimes this is portrayed as Shiva with two halves, one male and the other female. Other times, it is portrayed as Shiva with Parvathi, the Divine Mother. Shiva births the underlying structure of existence and Ganesh presides over it. Mother Divine brings that structure to life.

How Lord Shiva is Portrayed

Oftentimes, Shiva is viewed as the great renunciate, the austere ascetic sitting in meditation. He embodies the full renunciation of relativity, the process of transcending. He is shown white as camphor, beautiful, muscular, 3-eyed, with crescent moon in his hair, and from the summit of his matted hair flows the Ganges, white as milk. He is smeared with ashes and sits on a tiger skin. Rudraksha malas and a snake surround his neck. Near him is a trident and Nandi, his vehicle. One hand is up, giving a blessing.

White is the basis of all colors. Shiva, all pervading Consciousness, is the basis of everything in existence. The three eyes of Shiva represent the sun, moon, and fire. Through his three eyes, Shiva can see past, present, and future. The moon is soma, the nectar of the gods, the substance produced when meditating. The Ganges symbolizes purification. The flow of Shiva’s matted hair represents Vayu, the wind. Wearing a snake around his neck, Shiva is shown to be beyond fear, beyond time, and beyond the power of death. He is also the master of kundalini energy on one’s path to enlightenment. Lord Shiva wears vibhuti, sacred ash, reminding us that the ultimate reality of life is beyond the physical realm. The tiger is the vehicle of Shakthi, Mother Nature, and Shiva is beyond the power of Nature. The trident of Shiva is the symbol of the three qualities of nature, the three gunas: sattwa, rajas, and tamas, that are in his control. Shiva rides Nandi, the bull, showing that he is master of his impulses and also symbolically portraying the transmutation of physical energy to spiritual energy.

Lord Shiva is said to have appeared in numerous incarnations as Guru Avathara, an enlightened master, who teaches the knowledge of the Self to his disciples. Shri Adi Shankaracharya and Dakshina Murthi were considered to be such Avatharas of Shiva in different yugas (ages).