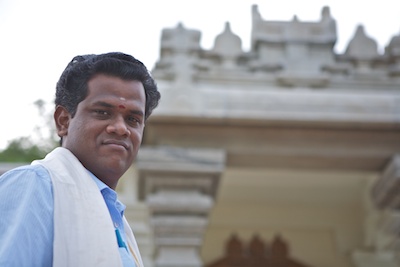 Sthapati Santhana Krishnan, was born into a family deeply committed to the practice of Vastu, architecture in harmony with nature. Following in his father’s footsteps, Santhana Krishnan received a Bachelor’s degree in temple architecture from The College of Architecture and Sculpture in Mamallapuram and an M.A., M.Phil in Sanskrit Language from Ramakrishna Mission Vivekananda College, in Chennai.

While in college, Santhana Krishnan was given the opportunity to gain further experience under the expert tutelage of Ganapati Sthapati, considered a respected master of Vastu. During this time he researched and translated ancient texts and scriptures relating to Vastu and language, including the 108 Upanishads. He has written and presented numerous papers which have gained appreciation among scholars.

Sthapati Krishnan has made a significant contribution to Mayonic architecture under the guidance of his mentor, Dr. Ganapati Sthapati. His primary focus is stone architecture with a highlight being in the marking of ten elephants at Saint Thiruvalluvar Statue, which stands in the sea in Kanyakumari. Another major project is the Gurunathar Temple at Reddiapatti, a stone temple renovation project constructed primarily in cement and steel. As a result of this project, he was awarded the title of “Sirpa Kalai Arasan” for his tremendous contribution.

Krithika Karuppiah is a contemporary architect whose interest in the traditional Indian architecture developed gradually. After completion of a Bachelor’s Degree of Architecture from Hindustan College of Engineering at Madras University, Ms. Karuppiah joined Dr. Ganapati Sthapati’s organization as an architect.

Ms. Karuppiah has been successful in creating magnificent structures that are spiritually and physically appealing. Her first residential project in Chennai brought her into the limelight when Dr. Sthapati, the client, and herself were interviewed by the Discovery Channel team.

Currently, Ms Karuppiah’s vastu consultation services are spread worldwide. She also assists in the research works and book illustrations of Dr. Sthapati. She delivers lectures for foreign delegates during the annual workshops on Sthapatya Veda conducted by the International Institute of Mayonic Science and Technology in Chennai and the American University of Mayonic Science and Technology in the US. 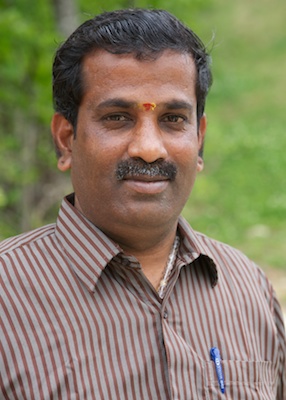 Sthapati Shiva Kumar, received his education in Vedic architecture through direct mentorship. His interest in the field began during childhood.  At 10 years of age he studied and assisted stone carvers on their projects. Seeing his potiential, he was hired at 14 years of age to assist master temple architect Shilparatnam. Sri. S. Shanmugam Sthapati.

Under the guidance of Shanmugam Sthapati, Shiva Kumar developed a steady mind and joined the great Dr. V. Ganapati Sthapati at the age of 17. For the following three years he spent 12 hours a day working with Ganapati Sthapati while studying temple building in the evenings. These years were critical for his understanding of how to work with groups, respect the team, and oversee the subtle and intricate proceedings of Kumbhabhesekums.

Dedicated and a fast learner, Shiva Kumar was sent to the U.S. to work as a stone carver on one of the largest Hindu temples in the country, the Sri Siva Vishnu temple of Lanham, Maryland. Three years later he returned to India to work with Ganapati Sthapati on the challenging renovation project of the ancient Gurunathar Temple at Reddiapatti. In 1994, Shiva Kumar again travels to the U.S., this time as a designer for the Ayyappa Shrine of Lanham, Maryland.

In 1997, Shiva Kumar receives his first appointment as the onsite sthapati for The Hindu Temple of St. Louis, MO USA. In 2001, he returns to India to learn planning, drawing, and elevations. There he marries S. Muthu Meenal MSc MPhil, the daughter of his mentor Shanmugam Sthapati.

In 2004 Shiva Kumar is awarded a certificate of recognition for his Vedic architecture expertise, by Dr. V. Ganapati Sthapati, after finishing temples in Nairobi, Egypt and Omaha, NE USA. Sthapati Shiva Kumar has reached the highest level of Sthapati ranking. His work spans four continents. He has worked with 300 shilpis and attended 35 Kumbhabhesekums to date. 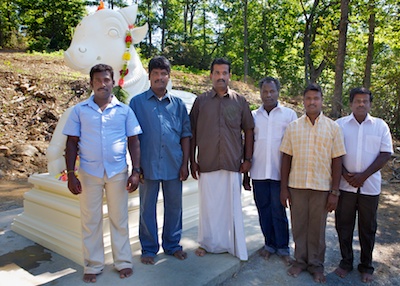 Since childhood, these highly-trained Vedic Artisans have been meticulously educated in the art of Vastu. Their precision in the sacred formulas of proportion and measurement is absolutely necessary to satisfy the strict requirements for creating true vastu structures that resonate with the Divine Spirit.

From October 2010 through July 2011 Mount Soma was blessed by the presence of our 7 Shilpis. Their skills and work ethic were a beauty to behold, as are the structures they created. During their time here we found them to be much more then temple builders. They became our family. A special thanks to all of them: