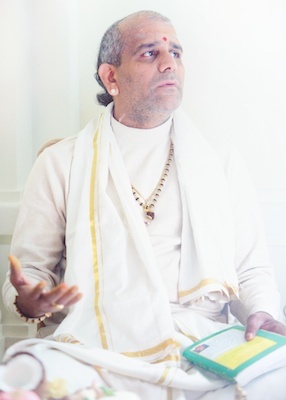 When Dr. Michael Mamas first saw his face, he felt that Pandit Prasad was the right person for Mount Soma. Pandit Garlapati Sai Vara Prasad has been carefully selected and retained as a permanent Pandit for Sri Somesvara Temple.

After completing his education at Sree Sanaga Veda University, Pandit Prasad was awarded the title of Avadhani when he scored First Class on the Kramantha Examination (equivalent to a post-doctorate in Vedic Studies).

Pandit Prasad dedicated ten years to working in the Veda Section of Maharishi Ved Vigyan Vishwa Vidya Peetham at Maharshi Nagar at New Delhi and Andhra Pradesh, teaching Krishnayujurveda and supervising various yagya performances. One of the gifts he received from working with Maharshi Mahesh Yogi is the ability to go inward and find a deeper sense of the knowledge. He understands the value of a transcending meditation and how it affects one’s approach to life.

After Maharshi Mahesh Yogi’s, Pandit Prasad joined on as an honorable Vedic Pandit at Tirumala Tirupathi Devasthanam (TTD) for two years. He has individually conducted many havans, yagyas, pujas, and Vedic ceremonies and has been known for his results. Pandit Prasad is wholehearted and devout when performing Vedic ceremonies. He is very caring and is sincerely interested in helping people. At the same time, he is strict in his adherence to Vedic guidelines and maintaining the purity of Vedic tradition.

We are fortunate to have found such an accomplished and experienced individual, willing to leave his family and country to serve Sri Somesvara Temple.