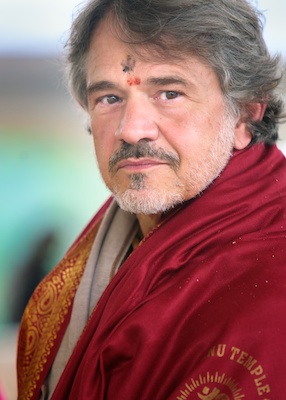 Michael Mamas is the visionary, developer, and luminary of Sri Somesvara Temple and Mount Soma. Mount Soma is a community dedicated to promoting integrity, peace, and harmony throughout the world. Sri Somesvara is the first of five temples to be built at Mount Soma. Designed according to the Vaastu Shastras, these temples will be the foundation for an enlightened city.

From the beginning, it was clear to Dr. Michael Mamas that the technology of the Veda was required if Mount Soma was to have the global impact he envisioned. His vision was and is to create a Vedic enlightened city that demonstrates how to apply the ancient knowledge of Veda to business, culture, and all areas of modern life. It will set an example of how to feed and nourish each culture, while harmonizing all cultures.

Some say Michael Mamas was an Indian Saint who incarnated into a Westerner’s body to purify Vedic Knowledge and bring it to the world. As Adi Shankara said, “The knowledge is easily lost and the understanding must be purified throughout time.” Michael Mamas is creating Mount Soma to purify spiritual understanding and bring out Vedic Knowledge in a way that makes sense to the younger generations and modern mentality.

Dr. Mamas is also the founder and CEO of The Center of Rational Spirituality, a non-profit organization whose purpose is to help people in today’s society awaken to their inherent psychological health and spirituality. This is done by teaching proper meditation and integrating ancient spiritual wisdom with modern rational spiritual thought and practice, regardless of philosophical, religious, cultural, racial, political, or social proclivities.

Michael Mamas began his Eastern studies at age 21 with his beloved Guru, Maharishi Mahesh Yogi, the embodiment of Vedic Wisdom in the eternal tradition of Vedic Masters. Soon after, he awakened to the Knowledge and spent a decade living a monastic life. He has been teaching for over 35 years. He is the only Westerner ever to be awarded the title, Adhyatma Vidhya Visharad (Mastery of the Deepest Spiritual Knowledge).

Dr. Mamas’ Western education includes a Doctorate in Veterinary Medicine, a Master of Business Administration, and a double major in undergraduate honors Physics and Mathematics at Ohio State University.

Michael Mamas explains abstract concepts in concrete terms, merges Eastern and Western thought, and unites science with spirituality. Dr. Albert Einstein once said, “Science without religion is lame, religion without science is blind.” By unifying science with religion, Dr. Mamas brings fulfillment to both. What he offers satisfies the mind and the heart.

Michael Mamas brings out ancient Vedic Knowledge in modern terms. He makes the complex seem simple, building upon it until profound truth resonates within the listener. He weaves science, the art of practical living, and spiritual evolution together, rapidly advancing the health, happiness, and success of those who receive his words.

Michael Mamas is the embodiment of Divinity, the embodiment of Knowledge. His daily awareness is on the world and bringing peace and harmony to it. It is his mission in life to bring this Divine Knowledge forth and transform global consciousness through Mount Soma.

This is what people say about Dr. Michael Mamas:

“As a Jyotishi, it would be difficult to imagine a more spiritual chart than that of Dr. Michael Mamas. He is a profoundly spiritual man who integrates deep Vedic knowledge with the modern world. He is brilliant. Humanity would do well to listen to him carefully.” – Pandit Sanjay Rath

“Michael Mamas’ insights into spiritual teachings are astounding. I believe he will be remembered for over a thousand years as one of the world’s great teachers—like Buddha.” – Dr. Tien (Taoist Master)

Michael Mamas speaks of Vedic Knowledge as the Knowledge of Nature. Since Nature is at the base of everything, Veda is at the base of everything. Dr. Mamas is able to explain Vedic concepts in terms of mathematics, physics, personal development, spiritual growth, and our heartfelt and profound relationship with the Gods. All areas of knowledge build on one another in an interconnected way so that they all come together in a seamless, logical whole. This deepens our understanding of everything and everyone, including our relationship with God.

In these videos, Michael Mamas is bridging the gap between the spiritual and Western scientific approach to the Gods. The context is that the Gods are seamlessly one and each God is frictionlessly merged with the other. They are laws of nature. It is important to understand that all of these principles exist in physics. But the physics of music does not convey the full meaning of the music. Creation can best be understood through the portal of the personified, namely the Gods.

Michael Mamas discusses “Embodying Knowledge” in this video. In our exploration of the Veda, we need to really take a step back, and take a look at what Knowledge really is.

Audio – Awakening to Your True Nature

From a Michael Mamas talk addressing the nature of the Self, and the process of spiritual evolution.

Part 2: The Process of Spiritual Evolution

“All auspicious dates in the Vedic calendar relate directly to celestial and cosmic occurrences. By celebrating these, all levels of our life align with the rhythm and flow of nature. This can be viewed as a technique to evolve…” – Michael Mamas

“…wise is he who can be taught.” – Katha Upanishad

Dr. Mamas Comment: Wisdom is the flip side of humility.

“To the enlightened Brahmin all the Vedas are of no more use than is a small well in a place flooded with water on every side.” – Bhagavad Gita, Chapter 2, Verse 46

Michael Mamas’ commentary: Memorizing and knowing all about the Veda is not the same as truly knowing (embodying) the Veda.