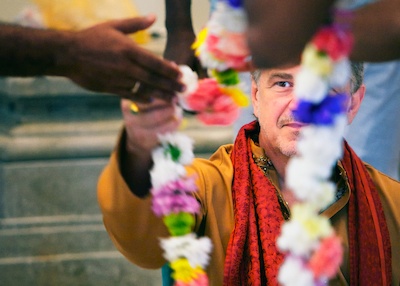 The idea of Śrī Someśvara Temple began to take shape in the year 2006.

Dr. Michael Mamas had already been laboring for years to bring Mount Soma, a community dedicated to the evolution of all, into existence. It was clear to him that the technology of the Veda was required if Mount Soma was to have the global impact he envisioned. A Shiva Temple, constructed with the precision prescribed by these ancient texts, down to every last detail, was the answer.

Few can comprehend the vast resources of knowledge, skill and funding required to build a truly Vedic temple. To see all these components come together, along with the selfless dedication and unbounded commitment of those involved, is nothing less than miraculous.

Lyle and Marcia Bowes, students of Dr. Michael Mamas, stepped forward with the necessary funding. Additionally, as project manager, Marcia Bowes took on the colossal task of coordinating the conversion of Vastu design details to fit American engineering and construction standards, as well as county regulations. 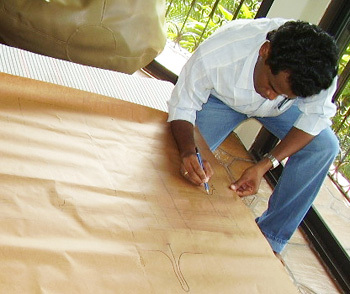 Master Temple Architect S. Santhana Krishnan Sthapati, who was directly mentored by the great master builder and shilpiguru Dr. V. Ganapati Sthapati, was commissioned for the design, carving and assembly of Śrī Someśvara Temple. Vastu Architect Krithika Karuppiah, another student of V. Ganapati Sthapati, joined him as assistant and U.S. liason. Then in the Spring of 2007, Michael Borden (an American architect, also trained by Dr. V. Ganapati Sthapati) travelled to Chennai, India to join in collaboration on the temple design. With these three highly skilled architects working together, the plans for Śrī Someśvara Temple emerged, showing great promise.

Once the design was complete, the shilpi craftsmen (stoneworkers) began to extract the specific rock for Śrī Someśvara temple’s statues and shrines. Not just any granite stone can be used; particular qualities are required for each application. Much effort was spent identifying masses of rough stone acceptable for the specific functional elements of Śrī Someśvara temple. After the stone was cut into manageable pieces, they were moved to the sculpture yard, and at this point were considered sacred. 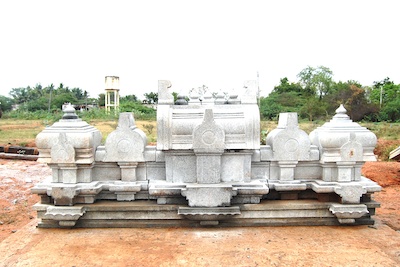 It took several months for the shilpis, using only hand tools, to carve the stone. They brought the granite pieces to a level not completely finished – so they could be refined as they were installed at the temple. Then in May, 2008 the 46 tons of granite sculptures were shipped by boat in two containers (a total of 146 crates) from Chennai to the U.S. temple site in Western North Carolina.

Meanwhile, Russ Woods – from Woods Architecture in North Carolina, was busy bringing the building design into compliance with the North Carolina commercial code. This was no small task, as the precision of Vastu architecture is so extensive and leaves very little room for modification. After months of consultations and rigorous attention to the smallest details, his drawings were finalized and approved by the State of North Carolina in the spring of 2009. 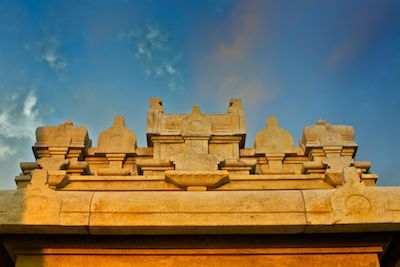 Alan Best of Best Built, Inc. was contracted for the construction of the building. The foundation was poured on July 23, 2009 and by summer of 2010, it was ready for the shilpis to begin their work of transforming this plain concrete shell into a Vedic masterpiece! It would later become clear that special thanks and praise were due to Alan Best’s project supervisor, Jimmy Swift, for maintaining an unprecedented level of accuracy and attention to detail. The sthapatis were amazed that all measurements were exactly correct, something they had never seen before!

After many bureaucratic and governmental delays, the shilpis finally arrived on October 12, 2010. Under the direction of supervising Sthapati, Siva Kumar, the shilpis worked nearly seven days a week, through ice and snow, wind and rain, to bring Sri Somesvara Temple to life. Their enthusiasm and commitment were both inspiring and humbling to all those fortunate enough to witness this creation first hand. 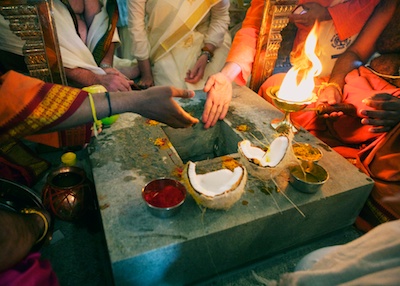 Jyotishi Sanjay Rath was chosen to calculate the muhurtas (most auspicious dates and times) for each milestone event involved in building and consecrating the temple. Professor Ganesh Rajagopalan served as a consultant, as was Sthapati Siva Kumar. Pandit Partha Sarathi Vempati was selected to be the chief coordinator for the consecration and initial operation of Śrī Someśvara. Pandit Garlapati Sai Vara Prasad was carefully selected and retained as the permanent Pandit for Śrī Someśvara.

Ceremonies Prior to Kumbabhishekam (Consecration)

November 3, 2010 – Garbhanyasam
Placed gem plates and 5 metals underneath each pillar of the inner sanctum, and raised the pillars. View pictures.

December, 2010 – Pratameshtika
Installed the final piece on top of the Shiva shrine (mandabam) – this brought the Shakti (power) down through the body of the shrine. View pictures.

May 15, 2011 – Ashta Bandana Pradishta
Installed the finished deity within the main sanctum which occurred when we installed the Shiva Linga during the consecration.

May 15, 2011 – Nayanonmeelanam
Eye opening of the deities ceremony.

May 16, 2011 – Kalasa Sthaapanam
Installed the Kalasa or copper finials on top of the temple structure – the final ceremony to be performed by the shilpis before consecration of the temple. 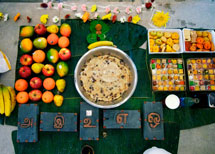